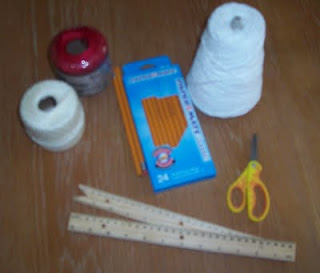 (click pictures for larger view, then backspace to return to blog)

My attempt at a simple ribbon type project on the backstrap loom. Here are my supplies. The pencils, wooden rulers, scissors were bought at the dollar store. The white cotton yarn/string was bought at Wal Mart. The crochet thread was bought on clearance for $1 each. (sorry for the fuzzy pictures) 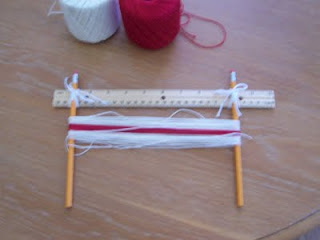 To warp my threads, I lashed two pencils at right angles on the ruler. Then I wound the warp in a figure eight pattern around the pencils. 16 threads of white, 16 of red, 16 of white. 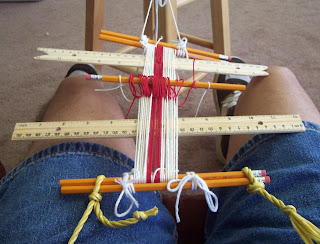 Then I moved to the warp to more pencils for use as loom bars. I found that adding another pencil to the loom helped stabilize loom bars and also gave me a means to wind up the work a little bit. My "backstrap" is just a piece of rope that I threaded through my belt loops. The other end is tied a leg of my trusty bar stool. NOTE: Next time I will tie up the other end to two legs of the barstool to help prevent the loom from tipping sideways! 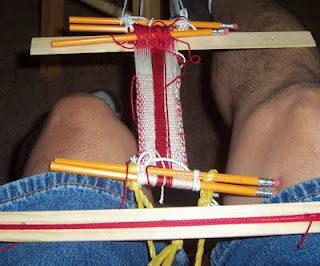 Here is the work in progress. I was able to wind up a few turns on the pencil/loom bars as I've seen in the diagrams of this loom. I did not get all the warps tight, so a couple of them were missed as I wove this ribbon. I did not stop and re-warp. I just pulled those missed warps after I was done.

I used the red thread as weft and a ruler that was cut to serve as a shuttle and beater bar. 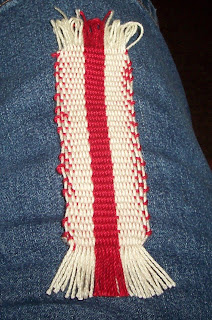 Here is the completed ribbon. 1 1/2 inch wide by about 6 inch long. I can see the weft on the edges. I guess I need to pull the weft tighter as I weave to get more warp face showing.