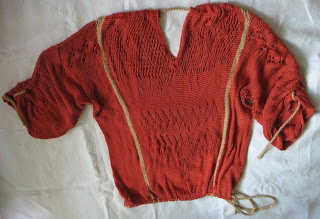 The above sweater is not knitted, it is not crocheted, it is not woven. It is created with an ancient process called "Sprang", a form of oblique interlacing or plaiting.

Here is the message Carol posted on yahoogroups "Sprang_List" along with these pictures.

Carol writes: Inspired by images of Egyptian work on the site Den Blauwen Swaen, I decided to try my hand at a sprang sweater.

I selected a fiber that seemed smooth, promising easy shoving of the twists. My daughter came along to advise me on color selection. Together we chose an orange egyptian cotton. I added some sparkly Patons yarn that I had in my stash. In the end I used ten 50gm skeins of the cotton.

I calculated the distance from hem of the sweater, over the shoulder, and back down to the hem, plus some more for 'shrink'. This ended up being about six feet.

Spranging began, working from the hem up. For interest, and another challenge, I added a bit of a diamond design, working S and Z in the same row. At 'armpit' level, I added on more warp on each side for the sleeves. A few inches later, I began a slit for the neck hole.

I sewed up the side seams, a crochet chain uniting the loops along the edges of the sleeves. The side seams in the body of the sweater were joined with an 'invisible seam': I carefully un-spranged the end thread (start and stop of the original rectangle) to the armpit, and then re-spranged using a large eyed needle, uniting front and back.

A 'safety cord' prevents the garment from 'un-spranging', going from wrist to wrist, passing behind the neck. My daughter tells me that an attachment behind the neck in a deep-V neck is commonly seen in current fashion.

I wore the sweater to the Handweavers Guild of America Convergence in Albuquerque.

Just wanting you all to know that it can be done, as the frequent comment in Albuquerque was "I thought all you could do with sprang was bags."

Here are some more pictures from Carol's posting: 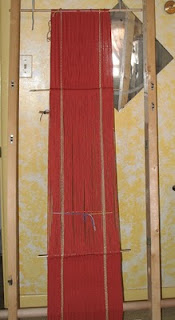 This is the initial rectangle on the sprang frame. 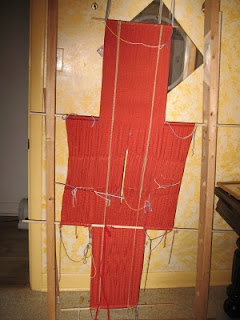 Adding warp for sleeves, creating shape of the garment, notice the slit for the neck hole. 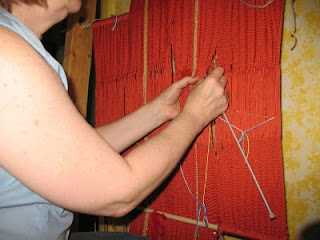 Spranging in sections. The knitting needle is only used to pick up strands that are laced over each other, this is not knitted.

You can see Carol's blog at: http://sashweaver.wordpress.com/

You can see Carol's webpage at: http://www.sashweaver.ca/

Love the sweater! I've been meaning to try one for several years, but haven't had the space for the larger frame.

Carol James did a great job on that sweater. I've never seen anything like that. Amazing and it is stylish. You could say it is timeless.
Have a good day!